Watson was developed by IBM’s DeepQA a research department in IBM; it was led by David Ferrucci, the senior manager of IBM’s semantic analysis and integration department.

According to IBM, Watson has seen its speed increase 24 times over a 2,300 percent improvement in performance, and its physical size shrank by 90 percent – from the size of a master bedroom to three stacked pizza boxes.

John Searle a philosopher argued that Watson cannot actually think on its own but is just like a document search. The main difference between Watson and document search is that document search takes a keyword query and returns a list of document relevant to the query while QAs like Watson take a question expression in native language which is not computer language and try to understand it better and returns an answer to the question. 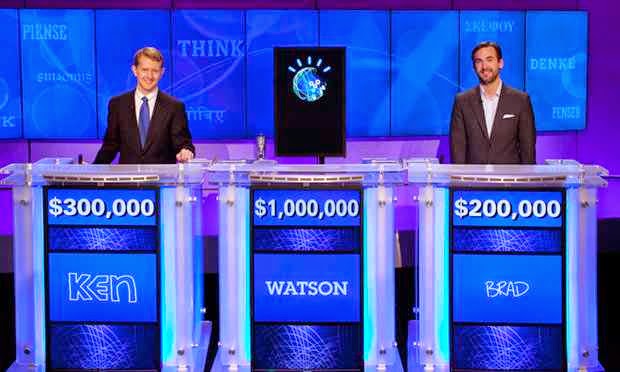 Watson successfully competed with human in Jeopardy, a united state government managed competition in February 2010 and worn the two human champions. Watson was able to answer questions correctly off-line as it has to be on equal ground with its competitors. In 2006 when Watson first started, it was given over 500 clues from jeopardy’s past program but it only answered 35% of the questions correctly but it upgraded to 95% in 2010 and answers at a greater speed

Watson was built using about ninety IBM power 750 servers each uses a 3.5GHz POWER7 eight core processor with four threads per core. Watson has a total of 2,880 POWER7 processors and a 16 terabytes of RAM which is enough to place Watson at the top 500 Supercomputer. Watson hardware cost was estimated to be about $3 million.

IBM Watson Group
On January 9, 2014 IBM announced it is creating a business unit around Watson, led by senior vice president Michael Rhodin. IBM Watson Group will have headquarters in New York and will employ 2,000 people. IBM has invested $1 billion to get the division going. This Group will develop three new cloud delivered services which are:
·         Watson Discovery Advisor;
·         Watson Analytics;
·         Watson Explorer.
Watson Discovery Advisor will focus on research and development projects in pharmaceutical, publishing and biotechnology.

Watson Analytics will focus on Big Data visualization and insights on the basis of language questions posed by business users.
In February 2013, IBM announced that Watson software system’s first commercial application would be for utilization management decisions in lung cancer treatment at Memorial Sloan–Kettering Cancer Center in conjunction with health insurance company WellPoint. IBM Watson’s business chief Manoj Saxena says that 90% of nurses in the field who use Watson now follow its guidance
Watson Explorer will focus on helping enterprise users uncover and share data-driven insights more easily. The company is also launching a $100 million venture fund to spur application development for “cognitive” applications. IBM CEO Virginia Rometty said she wants Watson to generate $10 billion in annual revenue within ten years.
so what do you think about The Watson computer?