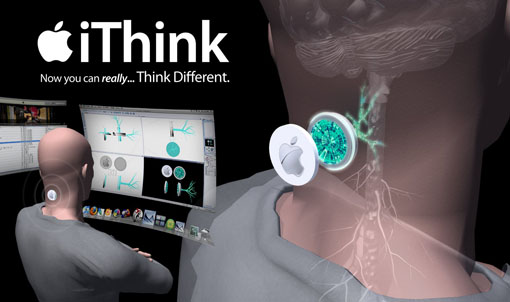 I think I have a full memory of IRobot, with this fast evolution in the robotic world we will soon be facing a whole lot similar to the all known robotic movie.
Recently we heard of a robot win a game against a smart American, well that’s not the first of its kind; in 2010 Watson a stand alone artificial intelligent computer successfully competed with human in Jeopardy, and worn the two human champions. Watson was able to answer questions correctly off-line as it has to be on equal ground with its competitors.
Now the “Big Boy” mobile company Apple has disclosed an information of their already existing project that links human brain with a computer. In other words let your computer system think like human and human work like computer.
The designers Paul Micarelli said to have created the Apple iThink Concept that will enable user connect their mind to their computer system. Using the Symbiosis™ Neural Interface: Direct brain-computer link technology, the concept will feature an Intel Fusion Quantum processor that calculates at the speed of thought, while holographic data storage options ensures you have virtually unlimited storage space
Awesome, bet still shady. Hopefully this could help in human thinking and also help a lot in the medical section too.
There have been not a lot of information about this project, it was first seen and heard of in 2005 and the supposed official Facebook page has just 70 likes. For now we do not have any more information about the project except the one gotten.
Specifications
• Size:
1.5 x 1.5 x .5 inches
• Symbiosis™ Neural Interface:
Direct brain-computer link means your mind and computer are one!
• Intel Fusion™ Quantum Processing:
Uses the power of the atom to instantly compute at the speed of thought.
• Holographic Data Storage:
The iThink’s tiny internal holochip has a staggering individual capacity of over 666 Yottabytes (1000^8), for seemingly infinite augmented memory
• Intra-neural Communication:
Mentally allow or block any kind of signal you want to send or recieve instantly over the wireless iThink global network
• Perceptual Immersion:
Images, sound, & other data are projected virtually into your sensory fields by directly connecting into your brain’s activity
• Integrated GPS and Google Earth:
Receive directions and location information anywhere on the planet, and the ability to be located in case of an emergency