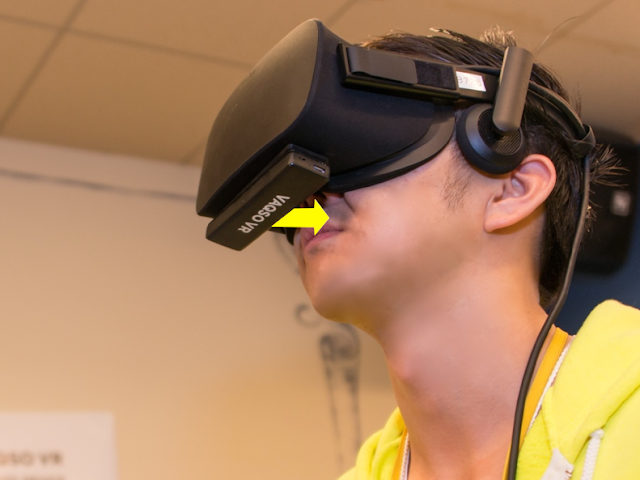 Virtual reality has been tagged “Taking You to a New World” what will be the world without a smell. Well in the revolutionary world of virtual reality, smell has become a new challenge and some developers have already started working on fixing that.
A Japanese company claim to have made virtual reality even more realistic by adding the controversial sense to accompany the already perfected hearing and sight. The VAQSO VR is a small emitting device made up of cartridges, with different specific smells. VAQSO is an attachment to a VR which will release certain smells to drag your attention and concentration further to the game.
The Tokyo based Vaqso said to have developed an odor emitting attachment for VR headsets. About the size and shape of a candy bar, the device has cartridges for up to three different distinct smells and has an inbuilt fan that can change the intensity of the smell based on what is happening on the screen.
The startup raised about $600,000 a week in a seed round from Japanese venture capital firm Weru Investment to continue development of the gadget, which works with Facebook’s Oculus, HTC’s Vive and the PlayStation VR headsets.

The company is hopes to work with movie, advertising and games companies to attach its scent technology into their products. Using a plugin designed by the startup, developers can insert a command into their games that will instruct the Vaqso device to release a scent at certain moments in the action. If you were to brake through a wall while playing a Vaqso connected game, you could potentially smell the rubble.
Vaqso seems not to be alone in looking to connect scent delivery with virtual reality. The Virtual Human Interaction Lab at Stanford is said to be studying VR’s influence on perceptions of food. And projects like Birdy combine scent, touch and VR to turn users into birds (minus the feathers).

As CNET has currently pointed out that smell is already associated with VR in many specific situations. Hopefully we will see something a little more interesting than just games pets and wild life in our Virtual reality headsets