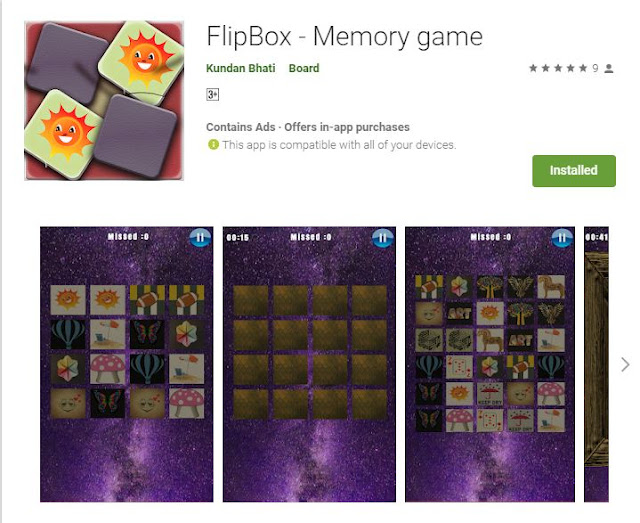 Android games have been the best way to keep yourself busy and also a means of having fun with your android device. Despite that, there have also been several other types of android games that help you test your intelligence and how smart you hare.
In my search for an android game that can help keep me busy and also test intelligence I found an android memory game.
This type of game tests how long you can remember something in a very short period of time. They test to know if you can actually picture what you see for a short time in the next few minutes.
The very one that got my attention was as a matter of fact a new game in the play store. Has little review that’s how I knew it’s new. Despite that it’s really a great one and I cannot do without mentioning how addictive I almost got. I was trying to get pass a level faster and faster. This keeps exercising my brain and enhancing my memory hormones (if there are any lol).
This game is FlipBox, as the name goes; in this game you get a number of boxes depending on the difficulty level with images in pairs. The boxes will flip after some time and you will be asked to identify the position of all pairs with clicks.
This game is totally offline and is sized about 35MB. This makes it less memory consuming and also very fast.
How it works:
Game will show you some images on cubes for few seconds, each cube will have one image on it and one image will appear on two cubes. you need to memorize the images and their place in the game. After few seconds images will be replaced by a texture. You need to unveil and match all the images. As mentioned one image is on two cubes, you need to unveil both the cubes one by one, then continue with next image and so on.
Game has three difficulty levels.
Easy
8 images on 16 cubes.
Medium
15 images on 30 cubes
Hard
24 images on 48 cubes
Time you have taken to unveil all the images and wrong attempts will be shown on game completion. Top 10 scores for each difficulty levels are maintained on scoreboard.
This is an awesome game you really need to play. And please there is only one way you can show the developer he has done a good job and that is writing a review tell how much you like the game and what advancement or adjustment should be done.
Download in Play store
https://play.google.com/store/apps/details?id=com.kundanbhati.FlipBox