Recently, the number of high end computers that are being released into the market is quite alarming, making it more difficult to identify the best gaming pc. With alot of high end PC games launched almost every week, the best gaming PCs continue to be the best place to play your games. From best-in-class open world RPGs like Assassin’s Creed: Odyssey to intense first-person shooter games like Battlefield V, having the top gaming PC for your budget can make a ton of difference.
It doesn’t matter whether you prefer Intel, AMD or Nvidia – most PC makers will let you choose the best processors and best graphics card for your needs anyway. And, now that Nvidia Turing graphics cards are finally out in the wild, the best gaming PCs are about to get way better.
We went ahead and collected our top-rated gaming PCs, both from popular companies like Alienware and Dell to those you might not know, like Zotac. We put these PCs through rigorous testing to find out which ones will provide the best bang for your buck. These are currently the 10 best gaming PCs you can buy today, so you can start playing your favorite PC games.
1. Alienware Aurora R7

Ease of use meets a pretty chassis

VIEW ATAMAZON
Plays games smooth as butter
Attractive, not over the top design
Chassis lid a bit finicky
Noticeable fan sound
This isn’t your everyday pre-built gaming PC. The Alienware Aurora R7 feat of engineering in that it packs full-sized PC parts into chassis much smaller than your traditional mid-tower rig. At the same time it’s easily upgradeable and attractive to look at. All of which we would expect considering its extremely high price tag. Luckily, the Alienware Aurora R7 is both of these things and will impress those not ready or willing to build their own gaming PC.
2. MSI Infinite A 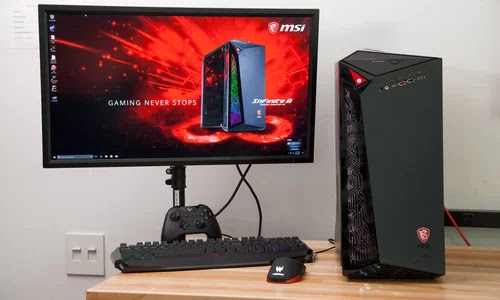 This VR-ready machine is built to last

€1199.99
VIEW ATAMAZON
Very powerful gaming system
Whisper quiet fans
Variety of ports can be confusing
High specs mean high price tag
It’s not uncommon anymore for PC makers to brandish their pre-built desktop rigs as VR-ready. What is unusual is to do so with a computer that’s also ready to conquer any game you throw at it at well over 60 frames per second and for under two grand. That’s exactly what MSI has accomplished with the Infinite A, a tower whose graphical efforts aren’t thwarted by its preparedness for VR, nor is it so expensive that it would see your head turn the other way.
3. Intel Hades Canyon NUC

Price: $949
VIEW ATAMAZON
Lots of ports
Easy to upgrade
Expensive
If you want a great gaming PC that doesn’t take up space, it’s your lucky day. With the Intel Hades Canyon NUC, you can have a moderately powerful gaming PC that’s much smaller than the usual affair – looking more like a set-top box than a high-end gaming PC. Don’t go thinking it’s weak, though – it packs just as much power as the best gaming laptops with its 8th-generation core i7 processor and discrete Radeon graphics. Just consider that you’ll have to supply your own RAM, storage and OS.
4. MSI Trident 3

A slimline console-sized mini PC for your living room

$1664.99
VIEW ATAMAZON
Compact size
Silent and cool running
External 330W power brick
Positioned as a ’console killer,’ the MSI Trident 3 looks a lot like an Xbox One S and is more powerful than a PS4 Pro, but at the end of the day, it’s a PC that feels just right in your living room.

Complete with all the ports you could ever dream of, the MSI Trident 3’s advantages are clear. Still, in trying to be as thin and light as possible, the MSI Trident 3 comes equipped with a 330W external power supply brick, resembling some of the most less attractive console designs.

PC gaming on the high-end, no tools required

$2299.99
VIEW ATAMAZON
Available GTX 1080 GPU
Looks awesome
Included mouse and keyboard stink
Limited store upgrade options
If you’re buying a pre-built PC, upgrades should be simple, right? That’s the philosophy behind the Lenovo IdeaCentre Y900. Embellished with red lights all over, the front of its chassis is bespeckled with textured patterns that’ll no doubt make your friends jealous. On top of offering support for a VR-ready GTX 1080, the Lenovo IdeaCentre boasts SLI support and room for up to 64GB of RAM, which are thankfully complemented by a convenient tool-less design.
6. Dell XPS Tower Special Edition

It doesn’t look the part, but plays it well

$1099.99
CHECK AMAZON
Compact, minimalistic design
Affordably priced
Non-K, locked processor
Much like the sublime Dell XPS 13, the Dell XPS Tower is a lesson in packing beefy specs into a svelte chassis. This inconspicuous gaming machine looks a lot like the computer that’s been collecting dust in your dad’s office, rather than something powering the latest PC games. But, beneath that quiet exterior, the Dell XPS Tower is one of the best gaming PCs on the market, with 8th-generation Intel Coffee Lake processors and Nvidia GTX 10-series graphics cards. With the Dell XPS Tower Special Edition,you’re getting one of the best gaming PCs money can buy, without any of the off-putting ‘gamer aesthetic’.
7. Origin Millennium

The ultimate power is freedom to choose

Sharp and solid new design
Stealthy PC case elements
More expensive than a DIY PC
When you buy a computer from Origin, it’s almost like you’re building it on your own. You have to be familiar enough with PC components to decide for yourself what goes into the rig and how much money you’re going to spend on it. So, of course, our only real criticism of the Origin Millennium is that you can build a similar model for cheaper. However, because of its subtle design and flexible specs, we’re willing to bet you won’t want to.
8. Alienware Area 51 Threadripper Edition

Top-notch power comes at a cost

$1763.99
CHECK AMAZON
So much space for activities
Record-breaking benchmark results
Absolutely massive
Absurdly expensive
In classic Alienware fashion, the Area 51 Threadripper Edition pushes the limits of both technology and your wallet. It’s wildly powerful, markedly featuring the latest AMD Ryzen Threadripper 1950X across all of its configurations. The Area 51’s triad-design hasn’t changed much since its introduction back in 2014, but on the inside this machine is essentially tool-less to upgrade, not that you would even need to.
9. MSI Trident X

Out of this world performance

$1549
VIEW ATAMAZON
Insane gaming performance
Nice aesthetics
Questionable build quality
We knew that it was only a matter of time before the best gaming PCs started rolling out with the latest Coffee Lake Refresh and Nvidia Turing parts, and the MSI Trident X is here to lead the charge. This small-form factor PC pulls no punches, and will absolutely demolish any game you throw at it, at any resolution. Just keep in mind that the thin metal build might be a bit flimsy for travel, and its price tag is kind of steep. But, if you’re looking for no-holds-barred power that won’t look out of place in your living room, you can’t do much better.
10. Corsair One Elite

Power without the bulk

CHECKAMAZON
Unbelievable gaming performance
Compact, near-silent design
More expensive than competition
Corsair has made a name for itself in pretty much every category of PC components, so it’s only natural that it would eventually create one of the best gaming PCs you can buy today. Enter the Corsair One Elite, a high-spec PC in a compact and quiet case that, while expensive, blows the competition out of the water. The Elite is a huge improvement over the original Corsair One, packed with an 8th-generation Core i7 processor, a Nvidia GTX 1080 Ti and more water cooling than you can shake a stick at. If you can afford its high price tag, the Corsair One Elite is one of the best gaming PCs you can buy today.